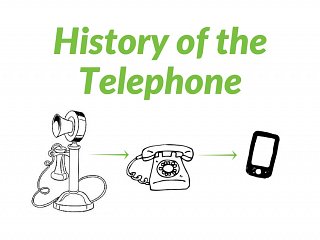 When Alexander Graham Bell famously made the first electronic telephone call in 1876, he started a true revolution in communication.

The ability to talk in real time, instead of writing letters that took days or weeks to deliver, has enriched all our lives from that day on, but the telephone has gone through many guises during that time, and continues to evolve even today.

Bell pioneered the gallows frame telephone, which worked by using an electromagnetic signal, which was picked up by a metal reed, then vibrated against a cloth diaphragm.

Candlestick telephones where you held one part to your ear and spoke into a separate hand-held mouthpiece became all the rage at the end of that century and the start of the next, only waning in popularity when manufacturers had the crazy idea to combine both into one handset.

The next move forwards was the rotary telephone, where you had to dial each number you wanted round to the base and then release. A slow process – and very frustrating if you accidentally got the wrong digit at any point, as you had to start again. Thankfully, they were gradually replaced in homes up and down the land as push button phones became more popular in the 1960s and 1970s.

Then, of course, came the answer phone – so if you weren’t home people could leave a message. Originally using mini cassette tapes, they moved to digital in the late 1980s.

Next phones became portable within the home – being able to walk around during a call without being tied to a base unit seemed amazingly modern. Of course, the natural next step was fully mobile phones, and the first commercial one was made available in 1973 – although it looked like a brick and wasn’t mobile at all compared to today’s slim smartphones that you can slip in a pocket.

Finally, in the 2000s, touchscreen technology came to the fore – and the rest, as they say, is history.

But while handsets were evolving significantly over time, the infrastructure used to make calls stayed the same for decades, only really starting to change in recent years.

While many analogue landlines (which are themselves becoming a declining force) still operate through copper wires, the move to digital is becoming unstoppable, particularly with BT’s recent announcement that it is phasing out ISDN over the next ten years in favour of Voice over Internet Protocol service (VoIP) – essentially calls over the internet.

VoIP, which we offer here at Boxx, is very much the future of telecoms, allowing users to get ahead of the game with useful features including call divert to mobiles, moving calls seamlessly between users and offices, as well as being able to put callers on hold and play them marketing messages. Not to mention that it’s often a cheaper!

Get in touch with us to find out more about the packages we offer – and be at the forefront of the telecoms revolution!