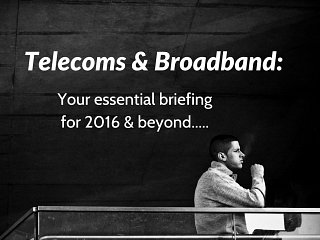 This year is set to be a big one for developments in the tech community that will impact the quality of our communications wherever we are in the UK…..

Ofcom’s Connected Nations Report combined with Government plans to put broadband access on the same footing as basic services (such as water and electricity) reveal significant trends and priority within the industry.

So you can keep ahead of them, we’ve prepared a summary of the key aspects……

Ofcom’s Connected Nations Report takes an in-depth look at the state of the nation’s telecoms and wireless networks, and had mostly positive news to report while accepting that there is still more to do; particularly in improving broadband and mobile availability/quality for consumers and businesses around the country.

Broadband: Coverage and quality of fixed broadband services in the UK has increased markedly over the past year. More than a quarter of homes (27%, or 7.5 million) have ‘superfast’ broadband (i.e. with a connection of 30 Mbit/s or more), up from one in five (21%, or around 6 million homes) a year earlier.

Superfast broadband is now available to 83% of UK households – almost 24 million – up from 75% last year, as BT rolls out its fibre network, Virgin Media converts more homes to faster packages and the Government’s on-going Broadband Delivery UK programme extends superfast broadband into areas not covered by the commercial market.

Broadband in rural areas also continues to improve, with superfast broadband now available to almost four in ten premises across the UK (37%, or 1.1 million).

One interesting trend noted in the report was a change in the way that people are using superfast broadband. Ofcom has found that, for the first time, users with speeds above 40 Mbit/s are downloading significantly more data – and those with the fastest connections are driving this increase. This increase suggests that people are getting much more out of faster connections, through greater use of bandwidth-hungry services such as catch-up TV, online film rental and video calls.

However, Ofcom has, as to be expected, also identified challenges in improving coverage across the UK. Around 8% of the UK’s homes – 2.4 million – are currently unable to receive broadband speeds of 10 Mbit/s or above – the connection which remains the tipping point after which most people rate their broadband experience as ‘good’. This figure jumps to around half (48%, or 1.5 million) in rural areas, where speeds are often affected by premises lying further from the network’s local street cabinet or local telephone exchange.

Superfast services are now available to the premises of almost seven-in-ten SMEs (68%, almost 900,000) – up from 56% in 2014. However, almost a half of SMEs (around 130,000) in areas like business parks are unable to receive speeds above 10Mbit/s. Ofcom estimates that by 2017 when 95% of all UK premises will have superfast broadband, around 18% of SMEs will still not have access to a superfast service – so there is clearly still an element of a two-tier service at play.

Looking to the future, ultrafast broadband, one of the next generation of superfast services, which Ofcom defines as a speed greater than 300 Mbit/s, is already available to 2% of properties – some 500,000 homes.

Ofcom also published its latest European Broadband Scorecard, which compares the availability, usage and price of broadband services across EU member states. It showed that, among major European nations, the UK has the best coverage and take-up of superfast broadband, the highest coverage of fast mobile services, and some of the lowest prices – so excellent news!

Mobile broadband was also examined in the report, which found that 4G mobile now reaches seven in ten of us, with 73% of premises able to receive a 4G signal from three of the four networks as operators continue to roll out faster mobile broadband. Four in ten (46%) have 4G coverage from all four major operators, and Ofcom expects that 98% of premises will be able to receive a 4G signal indoors by 2017.

However, the report shows there is more work to do on mobile coverage and quality of service.

While 99% of premises can receive a 2G signal, the proportion of the entire UK landmass able to receive a signal from all four operators has remained at 55% since last year. However, this is expected to increase quickly following an agreement between the Government and four major operators for them to achieve 90% geographic coverage of voice services by 2017.

Meanwhile, the Government has moved to put fast broadband on a similar footing as other basic services like water and electricity, giving every home and business a legal right to request a 10 Mbps connection by the end of this Parliament.

Designed to help cement Britain’s position as the most digitised major economy in Europe, work is now starting on introducing a broadband Universal Service Obligation (USO). The obligation will provide a ‘safety net’ to make sure that households and businesses can get the broadband speeds needed to do business online, access key services or stream live TV. It is due to go out for consultation imminently.

If you would like more information about broadband or more advanced internet solutions, please get in touch.