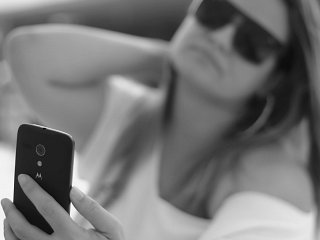 Selfies have become annoyingly commonplace across all social media platforms, but now it turns out there might be a real use for them…..!

According to reports, MasterCard is experimenting with a smartphone app that allows people to use facial scans and fingerprints to authenticate purchases they make online.

Easier to remember than a password and designed to cut down on instances of fraud, users will be asked to look into the phone during checkout and blink once, to cut out the chances of a photograph being used. They can also choose to authenticate their purchase by fingerprint.

“The new generation, which is into selfies…I think they’ll find it cool. They’ll embrace it.”

MasterCard users can currently set up something called SecureCode, which asks for a PIN for online purchases at checkout. It was used in over three billion transactions last year and stops card numbers that have been stolen from being able to be used online. But the thinking is that PINs and passwords, are more susceptible to being forgotten, stolen or hacked than body parts.

So MasterCard is following in the steps of Apple, whose Apple Pay showed that customers are happy to use biometrics to confirm purchases.

The use of facial scans (which would use the phone’s camera function) and fingerprints is reportedly going to be launched as a small trial involving 500 people later this year. MasterCard said it has partnered with every smartphone maker to make this method of verification possible, and that a pop-up will ask for authentication after a purchase.

Crucially for data retention purposes, MasterCard does not actually transmit a picture of the user’s finger or face. Finger print scans will create a code that stays on the device, while facial recognition software will map the face but convert it to an algorithm to send over the internet.

But even this isn’t the full extent of MasterCard’s experimentation – they are also experimenting with voice recognition as well as working to develop technology that will approve transactions by recognising a person’s unique heartbeat.

Exciting and innovative times in the fight against fraud!