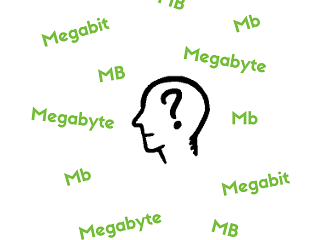 As this blog has noted before, the telecoms and broadband sector is rife with jargon, which can be very confusing for even the most experienced user.

It’s important to make sure you have a full understanding though, particularly of terms that seem very similar but are not interchangeable, as this can have a significant impact both on the service you end up with, and the speed with which you are able to download.

Take, for example, megabits and megabytes. Two words that look and sound very similar, and which are both often shortened to meg in conversation and online. Anyone could be forgiven for assuming they are two terms for the same service but that would be a big mistake.

In fact, a megabyte is eight times bigger than a megabit. Simply, eight megabits make one megabyte.

Now this may seem as if we’re splitting hairs, but it’s actually a very important thing to know.

If you have a file of 20 MB, and a 20 Mbps connection, without knowing the difference between the terms, you would assume you could download your file in one second. Now, of course, once you know that there are eight bits in a byte, you also know that you have to multiple that figure by eight.

Being seven seconds out doesn’t seem a lot, but do that multiple times a day and those seconds soon add up into minutes and more.

This can be critical if downloading material is a big part of your job or company culture, and if the person who chose and paid for the package didn’t take the time to understand all of the relevant terms correctly. It could add significantly to the time needed to do everyday tasks, as well as potentially pushing up costs.

Aside from the context, it is straightforward to work out which kind of meg is being talked about, as megabyte is condensed to MB, while the bit, as the smaller component, takes a lower case b.

As with so many areas of technology, things that seem quite complicated actually turn out to be quite straightforward in the end. But doing your homework with tech jargon will always pay dividends, most importantly that you end up with the right package for your business needs.

If you want to talk more about this or anything else your business needs, get in touch.