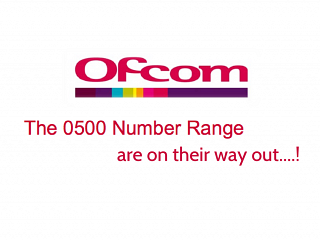 Numbers starting in 0500 are being steadily taken out of service as Ofcom phases them out ahead of withdrawing them completely on June 3, 2017.

Ofcom believes removing the numbers, which are mostly used for sales inquiries and consumer helplines, will benefit both consumers and businesses, due to the poor awareness of the 0500 number compared to the more popular 080… range.

The number series has been in long-term decline, with no new numbers issues since 1997/8.

A migration path to the new freephone service 080 85.. will be provided, with companies able to use the same six final digits as previously.

080 numbers also have the bonus of being free to call from mobile phones as well as landlines – but if users want to transition away from freephone numbers, an 03… number is a good option, as these often cost the same as local or national calls from both landline and mobile networks.

1) Where is your number published? – Because you have to change it in every single place it can be found, to stop the possibility of missed leads.

Obvious places include your signage, website, letterheads and business cards – but also think about any directories, such as Yell, where your company could be listed.

2) Don’t leave it too late…! Changing before the last minute is crucial – especially if you want to choose your new number.

Plus, if you get a new number in place now, you’ll have over six months to make the necessary changes to your details and plenty of opportunities to let customers know that you are changing.

3) Spread the word – Think about adding a message to your existing 0500 number advising of the new one.

So the key takeaway from this is don’t panic – but do start planning now to ensure a smooth and straightforward changeover.

As ever, if you need more advice or support to help make this change, or about your telecoms service generally, the Boxx team are only ever a phone call away!